By Gayle Ballinger on January 8, 2018 in Dog Behavior, Training

How To Train Your Dog to Stop Begging

Aww, look at those eyes, and that sweet face, how can you turn him down? 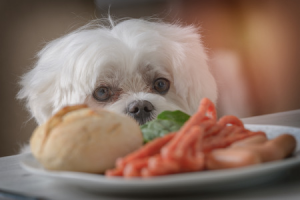 Begin to train your puppy right from the beginning, that begging for your food is not acceptable.

It isn’t uncommon for dogs to beg at the dinner table, or just whenever food is being eaten by humans, but it isn’t the best habit your dog can develop. In fact, it’s considered a common behavior problem.

Why do dogs beg? Let’s get real…the food just smells good, and you’re eating it…what more reason do you need? Another very primal reason it is said, is that dogs originally became domesticated by eating table scraps. I don’t know if that’s true or not, but neither reason should be grounds for your dog to beg.

First of all, let’s begin by saying:

Table scraps, people food, are not good for your dog!

…But your dog doesn’t know that, it’s up to you to safeguard his health.

Also, begging can lead to other bad behaviors:

Obviously it’s best if Fido never begins begging in the first place, but if he does, it’s time to begin training your dog to conform to better behaviors. Here are a few helpful ideas…

OK, I have to be honest…

Dancer (my dog) gets a nibble of just about everything I eat- but only after I am done, not during my meal. And I do mean nibble, usually a bread or pizza crust, since I don’t like them.

Pawsitive Steps Dog Training’s techniques are based around one simple question:
What do you want and expect from your dog?

We believe that the most effective method of dog training revolves around teaching your dog what you want them to do, how to behave, how to act in their environment, and what appropriate behaviors are under given circumstances and situations.

One of the best things you can do for your new pup is to get him/her signed up for a puppy class.

If you’re having a difficult time training your dog, don’t have the time to train him properly, or you would like to learn along with your pup, Contact me or check out my family friendly classes.

Gayle Ballinger, CPDT-KSA, has a passion for working with animals has been a driving force behind her career and life choices… she can help you with a new puppy or an older dog. She loves what she does and loves the animals she works with. Connect with her on Google+
View all posts by Gayle Ballinger →

Even as a young child, Gayle was in-tune with the animals around her. She gravitated towards every dog and cat she met and spent hours playing with her neighbor’s pet skunk. At the age of six, Gayle discovered that even the local squirrels would perform tricks in exchange for bits of her peanut butter sandwiches. This passion for working with animals has been a driving force behind her career and life choices. After all these years, she’s still sharing her peanut butter sandwiches.

Lucy is now walking on-leash (with the help of the Wonder Walker and the clicker training, which has truly worked a miracle on her) without pulling. She is doing great and I wanted to let you know and thank you for your advice and help.

I had a lot of fun training Tigger! We both look forward to our next class! Thank you!

"[Gayle] ... is laid back, fun… She holds small classes and has an assistant, and the classes are a bargain at the price."

We are on our way to having a well-trained dog! We just need to keep doing our homework, and now we know how!

Gayle has been a lifesaver with showing us how to train Gabriel in a kind and respectful manner.

Pawsitive Steps has saved my sanity!